Layton Kor, a little support for his family

Here is the link to the official fundraiser for Laytons family.  Give a buck or two.  How about a buck for every route or feature you know that has "Kor" in it?
http://www.youcaring.com/memorial-fundraiser/support-for-layton-kor/55319

The paste below is from the fundraising site: 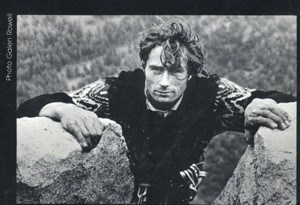 The climbing world suffered the loss of a legendary and beloved icon on 21 April 2013.  Layton Kor had been suffering from illness for some time, and he died in his sleep among his family in Kingman, Arizona, less than two months shy of his 75th birthday.  His lengthy illness generated significant medical expenses, many of which are not covered by insurance.  Now his wife, Karen, and son, Arlan, are both grieving and trying to figure out how to pay those bills.

Everyone who met Layton, read his writings or climbed his routes, holds him in a special, reverent place.  He was one of the great personalities and legends of our sport and a gracious and bright spirit to the end.

Arlan captured some of Layton's most beloved qualities when he wrote shortly after his dad's death:  "Rock climbing to my father was a passion which he loved and held dear ‘til his older years, sharing many experiences and adventures with close friends and making great friendships along the way within the climbing community which are displayed in many publications.  He always treated each and everyone he met with respect and took an interest in them not for what they accomplished but rather for who they were as a person."

Layton’s climbing contributions are almost mythical and include innumerable first ascents throughout the United States and Europe.  Among the ultra classic new routes he established, many are household names to generations of climbers: The Naked Edge, Ruper, and Yellow Spur in Eldorado Canyon, the Yellow Wall and the Diagonal on the east face of Long’s Peak, the Cruise in the Black Canyon of the Gunnison, and the West Face of El Capitan and the South Face of Washington Column in Yosemite. Layton was also the driving force in opening up the American desert with first ascents of Castleton Tower, the Titan, Monster Tower, and Standing Rock in Utah, and Fast Draw and Bell Tower in Colorado National Monument.
It has been said that if Layton had a dollar for every time a climber repeated one of his routes he would have been a wealthy man.  Layton always felt that he was rich beyond measure in the friends that he had and the life that he felt so fortunate to have lived.
Layton made all of our lives richer by his kindness and compassion.  His unflagging energy and drive inspired us to reach our potential and exceed our limits.  His family needs our help during these sad and difficult times and we have the opportunity to do so and to thank Layton.

Whether you knew Layton personally or knew of him, whether you’ve climbed his many stellar routes or aspire to do so, please give generously in appreciation of the difference Layton made in our lives and to support his family in this difficult time.
Photo Credits. Layton West Face: Galen Rowell; Portrait of Layton: Jim Herrington; Photos of Layton and Karen: Pat Ament; Photo of Layton and Arlan: Cam Burns; All other photos: Layton Kor collection.